Yehuda Katz was born on July 18, 1959 in Ramat Gan, Israel. His parents, Yosef and Sarah, are Holocaust survivors. As a child, Yehuda demonstrated extraordinary scholastic ability, and developed an almost insatiable passion for religious studies. After completing high school Yehuda chose to do his military service in the Israel Defense Forces (IDF) Hesder framework, which combines religious studies and army service. Yehuda split his time between religious studies at *Yeshivat Kerem Be'yavne, and the I.D.F. Armored Corps. During this period, Yehuda's dedication to study became almost legendary. Usually sleeping only a few hours a night, he spent the vast majority of his day and night in the Yeshiva's beit midrash (study hall) as a star pupil, usually surrounded by other students who wanted to benefit from his remarkable erudition. Yehuda's parents, justifiably shared his dreams of his one day becoming a leading Judaic scholar and rabbinic figure. 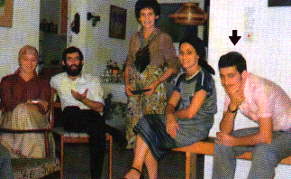 In June 1982 those dreams were displaced by the nightmare of Sultan Yaqub. With the outbreak of hostilities in Lebanon, Yehuda joined his friends in Lebanon. He was sent into battle at Sultan Yaqub just 10 days before his scheduled release from the army. It would be at the abortive battle at Sultan Yaqub that Yehuda's religious conviction and leadership capabilities would come to the fore one last time, before he would go missing along with his colleagues Zachary Baumel and Tzvi Feldman. In a situation permeated with fear and apprehension, Yehuda gathered and addressed his friends on several occasions. He drew on his extensive knowledge of Jewish legal and ethical writings, and spoke of the proper ethical and emotional qualities demanded by Jewish law of a Jewish soldier. He successfully managed to strengthen the resolve and calm the fears of his fellow soldiers, many of whom had never before experienced battle.

Three years later, Chezi Shai, an Israeli soldier captured at Sultan Yaqub by forces loyal to Achmed Jibril's PFLP, was returned to Israel in a prisoner exchange. Upon his return, Shai reported that he overheard his captors talking about other Israeli prisoners and heard Yehuda's name mentioned. Over the years the Katz family has pursued every iota of information regarding Yehuda, never forsaking the belief that he would come back to them. Grounded in this conviction, his sister Pirchia named her son Yochai -- a shortened version of Yo (short for Yehuda) -- chai (lives). Yehuda also continues to be remembered in the hearts and minds of the student body at Kerem Be'yavne -- since Yehuda's disappearance a daily prayer has been offered on his behalf by succeeding generations of students at the yeshiva. Yehuda's locker at Kerem Be'yavne still bears his name, and has not been touched since his disappearance.
*yeshiva is a Hebrew word referring to an institution for classical Jewish religious study